We making our Town a greener place.

There will always be change and any town that has substantial developments and highways proposals will have challenges, but we are doing our very best within current legislation to deliver developments that respect the countryside and enhance biodiversity where possible.

In Wichelstowe, we have amphibian and wildlife highways under new roads and substantial areas set aside as protected habitats. We have delivered additional sections of canal in addition to those already delivered in East Wichel and the first in Swindon in 100 years. These sections of canal are great wildlife habitats, with ambitions by the Canal Trust to connect to the sections in Wootton Bassett and beyond.

We are a leader in the Natural England District Newt Licensing Scheme with applications for new ponds and habitats in Mouldon Hill, Chiseldon and Bishopstone (on the farm belonging to the Chair of the Soil Association).

All major developments have to carry out detailed ecological surveys and provide management plans.

We have participated in the new ‘Trees for Climate’ Initiative and have ambitious plans to increase tree cover to 30% in the Borough. We have substantial funds for new tree planting in the New Eastern Villages.

We have our ‘Urban Meadows’ scheme which is now in its second year, working with Wiltshire Wildlife Trust increasing biodiversity by additional wildflower meadow planting and improving local watercourses such as Rivermead.

For the New Eastern Villages (NEV) we have already purchased land and planted 4000+ Trees and wild flower plugs. New paths and cycle routes will accompany the new roads. We have a major wildlife park within Lotmead to come forward and the NEV development will feature green corridors between the development islands as well as wetland areas and one of the greenest cycling/walking networks of any new development.

The above are a fraction of the measures under way in the Borough and we can be proud of our commitment to creating a greener Borough than the one we inherited and where we have the North Wessex Downs AONB and the Ridgeway Trail within our Borough Boundary.

What's going on at SBC - we are going Carbon Neutral! 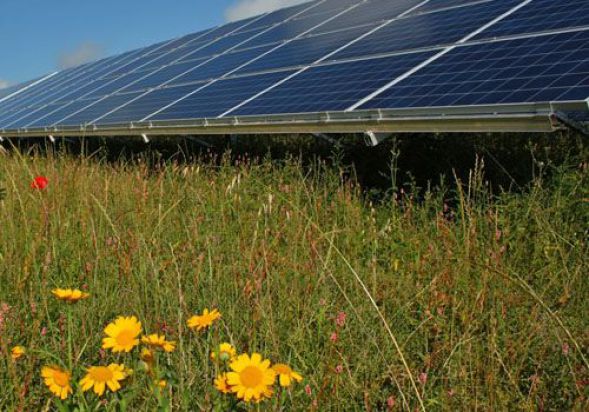 Swindon Borough Council commits to carbon neutrality by 2030 and I'm proud that I was the Councillor who proposed this important motion.

At a meeting of the Full Council on the 23rd January 2020, members unanimously agreed a motion committing the Council to reduce its corporate carbon emissions, with the aim of making the Council’s estate and activities carbon neutral by the end of the decade.

Members voted to ensure the Council’s strategic decisions, budgets and approaches to planning decisions are in line with a shift to zero carbon by 2030.

By taking a lead in the climate change movement, it is hoped that the Council can inspire local businesses, residents and other organisations to take a similar approach.

In a show of widespread unity, the motion was supported by the Council’s Conservative, Labour and Liberal Democrat Groups.

Councillor Gary Sumner, Cabinet Member for Strategic Planning, said: “I am extremely pleased that this important motion, which demonstrates our commitment to protecting the environment, was passed unanimously by all members last night.

“Climate change is, justifiably, right at the top of the political agenda at the moment, and this Council recognises how important it is for everybody to do their bit for the benefit of present and future generations.

“We sincerely hope that this significant vote will inspire other businesses and organisations to work towards full carbon neutrality. We all have a long way to go but the will and commitment is there and the target has been set.”

The commitment to going carbon neutral by 2030 follows a number of actions the Council has taken in recent months to play its part in protecting the environment.

A special Climate Change Working Group was established last year and quickly began thinking of actions. New parking standards in Planning will require every new house built in the borough to include charging points for electric vehicles; further investments in solar energy have been made; the Council has bought electric vehicles for its corporate fleet; installed electric vehicle charging points on the Civic campus; is investing in LED street lighting to save energy and has introduced a food waste trial to ensure that discarded food is properly disposed of.

Important links with organisations such as the Woodland Trust and Wiltshire Wildlife Trust have been forged with plans to increase tree cover across the borough over the next decade.

There is more to do and work has already started on assessing available options, but a carbon neutral Council will be a reality by 2030.

I was delighted to launch the 'Forest Meadows project' with Wiltshire Wildlife Trust in January.

WWT and SBC are currently working at Moulden Hill on a project to enhance biodiversity funded by a grant from Network Rail. This funding comes after recent upgrades to the Great Western Route Modernisation electrification programme and seeks to offset impacts on biodiversity by enhancing habitats elsewhere.

The Forest Meadows Project is a three-year programme funded by SBC through developer contributions and other biodiversity grants. It will enhance the management and wildlife of existing grassland areas, including where possible the reintroduction of wildflowers and more traditional management of the meadows.

This will benefit a range of species, including pollinators such as bees. Grazing animals may also be introduced on some of the sites to improve biodiversity and aid land management.

The project will link in with existing health and wellbeing groups in Swindon to encourage their members to get involved in a wide range of activities, from the sowing and planting of wildflowers through to the biological monitoring of sites for wildlife such as butterflies and moths.

The project will cover 12 meadow and forest sites within the Borough, which together cover more than 170 hectares. Most of the sites are located along the corridor of the River Ray, but the project will also link to other areas including Sevenfields, the Lawns, Wroughton, Highworth, Penhill, Rodbourne Cheney, and WWT reserves with existing meadows.

WWT will lead the work in collaboration with SBC, parish councils, and local community groups.

Cllr Sumner said of the project’s launch: “We are absolutely committed as a Council to improving biodiversity throughout the Borough so we are really pleased to team up with the Wiltshire Wildlife Trust to deliver the Forest Meadows Project.

“It builds on our commitment to reduce our carbon footprint here in Swindon and ties in nicely with existing tree-planting and wildflower initiatives we have in place as we aim for a greener future.

“I am also extremely pleased this particular project will have a focus on improving people’s health and wellbeing and I look forward to seeing the Forest Meadows making a real difference to the lives of local people in years to come.

WWT’s Neil Pullen said: “I’m really looking forward to starting work in Swindon later this month. Thanks to projects such as the Great Western Community Forest, large areas of green space and corridors can be found in parts of Swindon Borough. There are also many people within the Borough who have expertise or willingness to get involved; the Forest Meadows project will be another outlet for them to be able to get outdoors and make a difference for wildlife and their local community.”