Wanborough Traffic Calming - how and why the roads will change this year (2022) - both High Street and Wanborough Road.

Consultation on double yellow lines and no waiting restrictions in The High Street, Wanborough as part of the Wanborough Traffic Calming Scheme.

For detailed plans please use this link:

To support or object please use this link:

If the scheme didn't proceed there will be no funding available in future, apart from competing with other road safety requests across the Borough.

This is an unprecedented investment in road safety/traffic calming in the village and something which I personally spoke for at the time the New Eastern Villages was allocated.

A first consultation took place in Summer 2020 (a difficult time) which was published in the Lyden Magazine, social media, websites, local newspaper. I met a number of residents - with SBC officers in summer of 2021 to understand concerns and officers have apologised to residents for not coming back to them later last year as originally promised.

In the past two weeks there have been three site meetings with residents to address concerns about physical features of the traffic calming scheme which affected those individual residents (be it access or parking needs).

I attended two of these meetings with officers from SBC & residents and at the final one last Thursday I suggested a change to the village entrance at Callas Hill. This will introduce an additional pair of village 'gateway' features (shortly before Callas Rise) and road markings to make the road feel narrower and reinforce the speed limit. This allows us to remove the 'build outs' between Manor Orchard and Callas Hill.

We have also agreed (subject to final design) to move a build out slightly towards Manor Orchard to accommodate residents parking downhill from there.

Overall the scheme created additional spaces in the street but this revision may well provide more.

There will be a consultation in March on the required yellow lines and we have already agreed to remove them from outside the village hall. This was being done with good intentions of preventing people from blocking the Village Hall parking but the hall representatives are confident that they will not be affected as it allows additional parking in busier times.

New drawings of the revised scheme will be shared this week and the contractors start setting up their site compound this week.

There have been comments about ANPR systems and cameras - none of which are practical at this time - this scheme is not just about speed. You can see from the images below with cars mounting pavements to get through.

I hope this answers some questions. 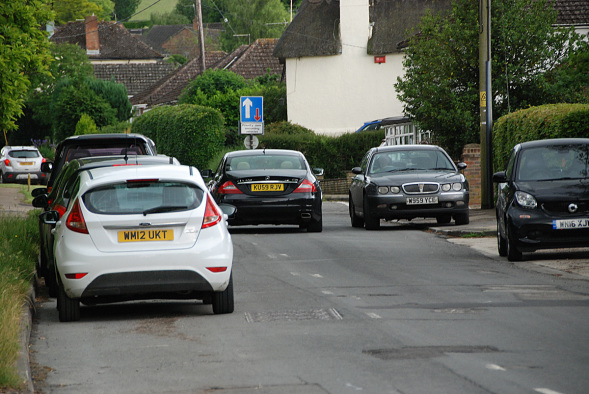 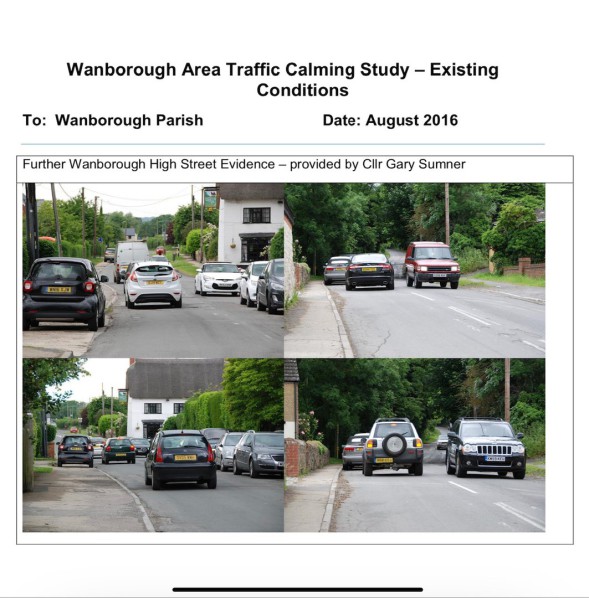 In response to your email and discussions we have had today please see the below:

The scheme undertook a consultation process, which is in line with the Councils protocol for such events. At the time of consultation we were in the height of the 2020 COVID pandemic and as such undertook an online consultation event for six weeks. The event ran from the 6th July to 17th August 2020. Through the consultation we received up to thirty responses from local residents which were all captured and an initial response was published online. The publication is still available online now: https://www.swindon.gov.uk/info/20161/nev_transport/1165/wanborough_traffic_calming_scheme

Residents, and members of the wider public were encouraged to participate in the online consultation. They were informed through a series of Social Media advertisements, pages in the local Wanborough Monthly Newsletter, Liaison with the Ward Councillor and Parish Councillors and hard copies available at the Civic Offices. Highlighted in the consultation, the scheme is programmed to commence in Winter 2021-22. Separate meetings were held in December 2020 between the Parish Council and Ward Councillor to present proposals and discuss feedback.

Between the consultation and now, we have refined the design, undertaken Road Safety Audits, completed surveys and investigations on the drainage, carriageway and utility searches. Residents directly adjacent to the High Street were notified of the survey works required for the scheme through letter dropping in July 2021. All residents who have requested on site meetings have had the opportunity to meet with Officers and yourself. Ongoing correspondence with the Parish Council and Ward Councillor has continued via email correspondence.

The final Road Safety Audit process was completed in December 2021 and detailed plans of the scheme were first shared with stakeholders on the 20th January 2022. The WTC scheme requires a number of new TROs, which will be advertised in accordance with the Councils policy for TRO applications starting mid-March 2022. During this consultation process residents will be able to give feedback on the scheme TRO’s. The scheme is due to be completed in August 2022. Philip or Suzanne cc’d in will be able to give you the duration of the advertisement of the TRO’s and further details if objections to TRO’s are made. I have been informed that 5 months is sufficient for the TRO’s to be processed. 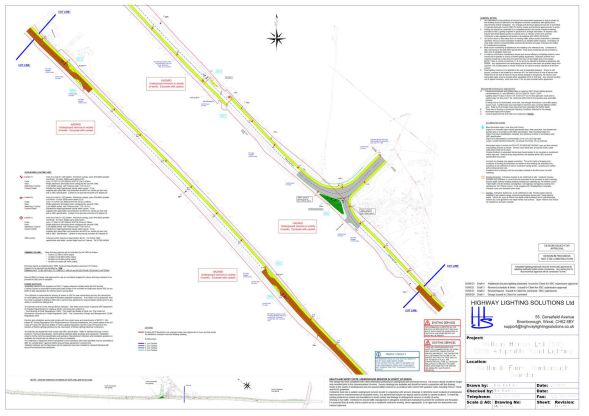 Due to the developent of Redlands the Wanborough Road (as part of that consent) will be narrowed, traffic calmed and have a pavement installed.

It will make it a safer road that the one we have now, but the price of that safety is lighting.

I objected, as did most of the Parish Council but the road safety audit is independently assessed - please see the email below.

Further to the meeting on 6th September, we note the concerns raised in relation to the street lighting proposed for Wanborough Road and the potential impact on the village.

As can be seen from the attached plan, the street lighting is proposed for the primary junction with Redlands, as well as either side.

In terms of towards Wanborough Village, the plan illustrates the street lighting would be located between the Redlands access and just after the traffic calming chicane, rather than continuing all of the way to the village.

The reason behind the street lighting extending to the proposed chicane is that there would be a safety concern were the key conflict areas, such as the junction / traffic calming, to not be illuminated.

The guidance from Institute of Lighting Professionals refers to the ‘five second rule’ which seeks to avoid road users transitioning from lit areas into dark areas and back to lit areas – as there is a risk that drivers eyes may not fully adjust to the differing lighting conditions and this may pose a risk to pedestrians or other users in the street.

An independent body undertaking a review of the Road Safety Audit (RSA) also advised this approach.

Since the meeting, Officers have reviewed potential measures to mitigate any potential impact from of the proposed street lighting. These include enabling the lights to be dimmed. Highways Officers have reviewed this and confirmed that the dimming controls outlined on the plan could be implemented in accord with safety guidance, and will be controlled by a Central Management System (CMS).

Further to this, Highways Officers have also investigated the use of baffles on the street lighting, which would further minimise any potential light spill. Whilst these are not used frequently due to the characteristics of LED lighting, and are only fitted in specific circumstances, Officers have requested that the developers install baffles on the proposed street lighting along Wanborough Road from the outset.

Whilst Officers note the concerns raised, highways safety reasons have made it clear that street lighting is required by this scheme.

However, to minimise any potential impact from street lighting, Officers have sought to locate street lamps only where they are essential for safety reasons, as well as secure other mitigation such as dimming and baffles.

On this basis, Officers will look to finalise the scheme with the developers based on the above / attached.

As part of the New Eastern Villages (NEV) development, a comprehensive access strategy has been developed to ensure that the surrounding area does not suffer from the effects of additional traffic. One such measure is a new link road, the Southern Connector Road (SCR), which will provide access to the new development from Commonhead and Pack Hill. In order to ensure there is not an increase in inappropriate through traffic in Wanborough and the surrounding villages, the junctions on the SCR have been designed to prohibit movements that could be used as rat-runs. To further discourage through traffic, the council proposes to install traffic calming measures within the village itself, these proposals are detailed below.

The scheme aims to reduce speeds and make the route less desirable for inappropriate through traffic with the use of traditional engineering solutions and psychological traffic calming, whilst also respecting the distinct character of the village.

Changes to the High Street include:

Changes to Pack Hill include:

Changes to Rotten Row include:

Changes to The Marsh and Burycroft include:

Below is an indication of how the Wanborough Road, from here to Covingham will change in 2022: 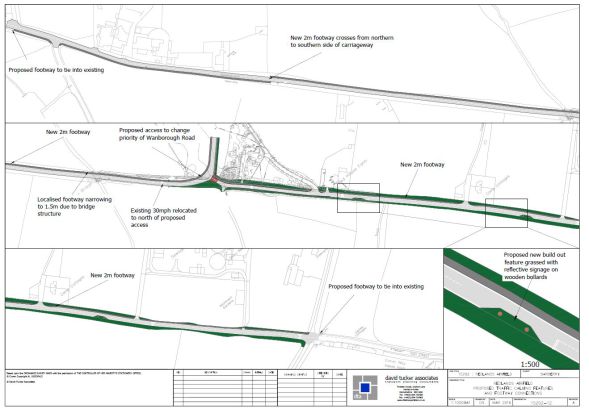 I first drove Highways Officers around Wanborough in 2015/16 to identify the issues.

Now that we have some funding identified I met officers again twice on site earlier this year to look at the High Street scheme as a logical starting point (the Wanborough Road is to be traffic calmed and narrowed) so this follows on logically.

I walked the High Street with the Highways Officers and scheme designers, identified various issues, showed them natural crossing places and where parking is required.

We also looked at improving the roundabout alignment with Rotten Row for safety.

I highlighted the crossing point to Hooper's Field in Rotten Row and I drove the officers to look at other issues and we looked at the narrow bend at the top of Pack Hill for which we have a proposal.

This scheme is to deter traffic from using Wanborough as a convenient rat run. It may cause local inconvenience, but we have asked for years to be protected as a result of forthcoming house-building in the New Eastern Villages.

As part of the New Eastern Villages (NEV) a comprehensive access strategy has been developed to ensure that the surrounding area does not suffer from the effects of additional traffic. One such measure is a new link road, the Southern Connector Road (SCR), which will provide access to the new development from Commonhead and Pack Hill. In order to ensure there is not an increase in inappropriate through traffic in Wanborough and the surrounding villages the junctions on the SCR have been designed to prohibit movements that could be used as rat-runs. To further discourage through-traffic the council has secured grant funding to install traffic calming measures within the village itself. The purpose of this consultation is to present the initial designs for a traffic calming scheme within Wanborough and receive feedback from local people on the proposals.

The scheme aims to reduce speeds through use of traditional engineering solutions and psychological traffic calming whilst also respecting the distinct character of the village.

Changes to the High Street include:

· realignment of the mini roundabout to reduce approach speed

· prominent narrowing gateway features with emphasis on the speed limit

· road narrowing through the High Street and the approach from Callas Hill.

Changes to Pack Hill include:

· Introduction of a loop activated LED carriageway sign. This will inform vehicles travelling in the other direction that a larger vehicle is approaching, allowing sufficient time to stop and wait.

Changes to Rotten Row include: